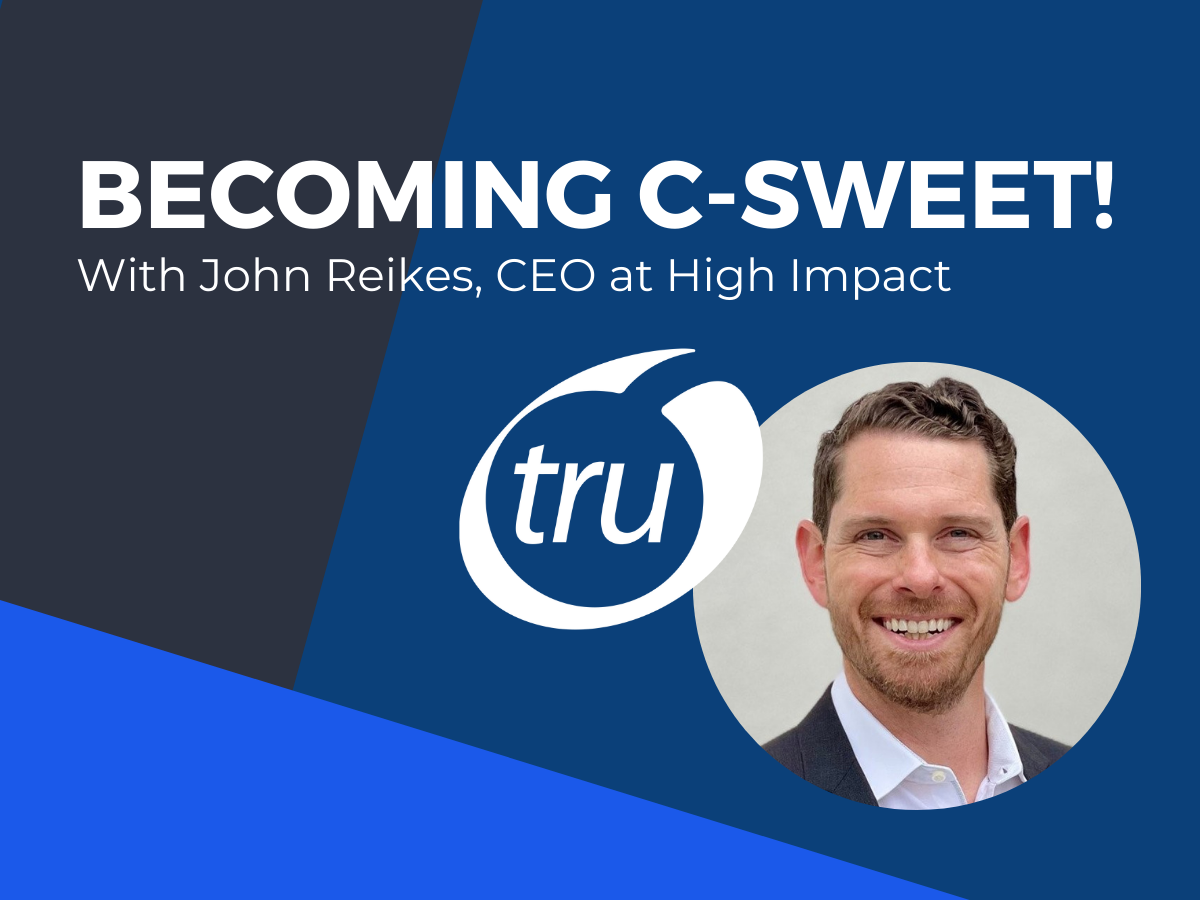 In this new series “Becoming C-Sweet!” TRU Staffing Partners founder and CEO, Jared Michael Coseglia, sits down with newly minted C-level executives who are stepping into the C-suite for the first time. These captured conversations aim to help LTN readers get an intimate peak into what it takes to become C-Sweet!

In this first offering of the series for Legaltech News, Coseglia interviews John Reikes, newly named CEO of High Impact.

John Reikes, CEO at High Impact, started out in software development before returning to school to secure a Juris Doctor at Loyola Law School Los Angeles. After a short time practicing law, Reikes merged his tech and legal expertise to transition into e-discovery, taking on a wide range of roles with escalating responsibility at Integreon, Kroll Ontrack, and CDS Legal. Prior to taking on the big seat at High Impact, he was the general manager of the Disputes and Investigations business unit at Elevate, a fast-growing alternative legal solutions provider. During his tenure, the unit’s revenues grew five-fold, customer satisfaction ratings increased to new all-time highs, and margins improved substantially.

I met John for the first time in the spring of 2017 in New York City’s Hell’s Kitchen at an Ethiopian restaurant that had quickly become my go-to westside meet-n-greet with talent that I wanted to break bread with (literally, with our hands). Since then, John and I have stayed close friends and colleagues. When I sat down with John to unpack some of the secret sauce to his successful rise from worker-bee to CEO, here’s what we uncovered:

Jared Coseglia: What are the skills and experiences that prepared you to step into a C-level position?

John Reikes: I know this is a bit of a cliché, but the first thing that comes to mind is my past failures. Not everything I’ve tried has worked and, notably, some of those failures fall into the “best laid plans” category (where, even with hindsight, it’s not clear why a strategy failed).

JC: Are you quick to admit defeat with yourself or with your team?
JR: I know I’m frequently wrong, so I actively solicit feedback from my team, I encourage them to tell me when I’m wrong, I listen to what they have to say, and I give that feedback great weight in my decision-making process.

JC: What about subject matter expertise in our industry—legal technology? How has this industry impacted your ability to lead from the C-suite?

JR: The e-discovery and document review space is an exceptionally difficult environment with a crowded marketplace, limited ability to differentiate, high expectations, tight margins, and endless pricing pressure. Being successful in this business requires a customer-centric mindset, strategic thinking, teambuilding skills, and a careful financial analysis and planning.

JC: What advice would you give to aspiring professionals who want to become C-level executives?

JR: Do a lot of things. Become a jack of all trades, even if that means being a master of none. Before becoming a CEO, I was a software developer, a lawyer, a project manager, a salesperson, a product leader, a tech founder, and a business unit general manager (I also recorded some music, taught car racing, and briefly worked for a car magazine). The risk here is that you build a disjointed and hard-to-follow resume. I think that was certainly the case for me, but I can honestly say I draw on every one of those experiences to help navigate my day-to-day.

JC: Is there one role you held that prepared you the most?

JC: What role did community networking play in getting you to where you are today?

JR: Your network is everything. Without question, my greatest professional failure was a tech startup I tried to launch a few years back. I analyzed the business opportunity backwards and forwards, invested heavily with my own time and money, and developed a great product (and it worked, it wasn’t just vaporware!). But I failed to recognize I was trying to launch a product in a space where I had absolutely no network whatsoever. When it came time to raise money, I simply couldn’t get a meeting. I couldn’t even get anyone to click on the link to the demo video, which was just a few seconds long. I eventually ran out of runway and had to walk away from it, which was absolutely crushing.

JC: What were your biggest fears about taking on a role in the C-suite?

JR: I imagine my biggest fear about being a CEO is the same fear most CEOs would have. As CEO, a lot of people are trusting you with their futures and counting on you. If you fail, your employees can lose their jobs and your investors can lose their money.

JC: If you were to go back and change anything in your career, what would you do differently?

JR: I’m of two minds on this one. When I look at my career to-date, I have no trouble spotting points that could have been streamlined. Yet, when I think about that more direct route, I question whether I would have developed the skills, maturity, and empathy needed to do the job well.
Download the full PDF article here:
Thought Leadership TRU in the News